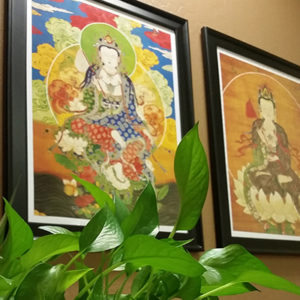 Fibromyalgia is on the rise in America and in El Dorado Hills, I see it regularly. From the western medical perspective, fibromyalgia (or Chronic Fatigue Syndrome) can be a difficult disease both to identify and treat.  A patient can suffer for months, sometimes years before being diagnosed.  It’s difficult to diagnose because it manifests in so many different ways from patient to patient.

A Closer Look at Fibromyalgia

Muscle and joint pain, extreme fatigue (worse with exertion), sore throat, depression, disturbed sleep, low grade fever, and ultimately lowered immune response. There is much controversy surrounding this subject, however, one thing that is agreed upon is it is an immune dysfunction.

Good News: Acupuncture is a particularly effective way to treat fibromyalgia. If you live in or close to El Dorado Hills, I am a great resource.

The disease can start with a virus which gets the best of an already compromised immune system due to toxic overload or can be a result of  long term inflammation which has become chronic. About 65-70% of the immune system in in the digestive tract. Altered gut composition (like from anti biotics and NSAIDS, GERD, Chrons, Leaky gut, or Allergies) can begin the process of chronic inflammation and mal absorption. This in turn negatively effects the brain and causes a cascade of altered responses.

Often MD’s say ‘it’s all in their heads,’ however, there is clearly a physical response that needs to be addressed. Historically, fibromyalgia was originally called a mental disorder then recognized as a physical illness. Now the pendulum is swinging back the other way. From the Traditional Chinese Medicine (TCM) or whole body approach, it is both mental and physical – and both need to be addressed simultaneously.

Doctors in El Dorado Hills, as elsewhere, often prescribe medications that do nothing for the pain and further complicate the condition. Most of the time my patients with fibromyalgia have already tried every western treatment with little to no positive benefit and come to Valley Acupuncture as their last resort.

When the body’s natural energy is altered there is, from a TCM perspective, an underlying deficiency of the qi/blood is usually seen in chronic cases and simply reflects a weakened state that results from chronic imbalance.

It is important to note though, that with fibromyalgia, like all western diseases, the underlying TCM patterns that give rise to the symptoms may be very different across individuals. Pain is the result of stagnation (of energy/blood/fluids) and therefore when there is both qi and blood stagnation there is almost certainly going to be pain. The liver qi stagnation often translates symptomatically into stress, depression and anxiety that are exacerbated by chronic pain and discomfort.

Treatment of Fibromyalgia with Acupuncture

Acupuncture is a safe, natural, and most importantly effective method for treating fibromyalgia. In my clinical experience, most patients are able to notice at least a moderate and often more significant reduction of the pain and discomfort within a few treatments. The patients notice their stress is reduced or relieved and their hope returns.

In diseases like fibromyalgia there is almost always a very strong emotional aspect of the disease, most often depression but also anxiety, restlessness, irritability and low affect are commonly experienced.  Often Western treatments ignore the emotional component of fibromyalgia or prescribe some sort of antidepressants which may create a host of other problems.

Since fibromyalgia often presents with multiple symptoms and doctors tend to focus on only a few.  A GI doctor will deal with what he knows, a psychiatrist may prescribed drugs only for the emotional component. Often no doctor is overseeing all the prescriptions which is one of  the reasons drug interactions are a leading cause of death in this country.

The hallmark of TCM is that we are able to treat the patient as a whole, in effect addressing all symptoms all at once by identifying the underlying imbalances that generate those symptoms.

Where Do We Start?

I begin with the “Critical Conversation” a complete intake including emotions and ask the difficult questions and compassionate LISTEN. We start with a three month treatment plan, that’s 12 treatments with weekly re-evaluation

If you have questions and would like to know more or schedule a time to talk – please be in touch. I am available in the El Dorado Hills area early in the week.

Remember to ask about our FREE Consultation

Please join us for upcoming Hourglass Workshops and Events.

For more information about our local workshops and events, simply give us a call at 408-835-7870 or email us via our Contact Page. We look forward to seeing you soon!

"I had some extreme joint pain and tiredness and was reminded NOT to use feeling ill as an excuse to NOT see Nancy! I saw her the next day and felt immediate relief after my session. I had more energy and no more joint pain. Nancy Burns has awesome bedside manner and really cares about her clients. She takes the time to get to know you and goes out of her way to find ways to help you, even if it means referring you to other practitioners." - Holly T.

Pain Management – I have had Nancy treat me for stress, shoulder, knee and sciatica issues. She is very professional, personable and I experienced GREAT results from all the treatments. I HIGHLY recommend her. My husband is a chiropractor and he has referred several patients to N… END_OF_DOCUMENT_TOKEN_TO_BE_REPLACED

Facial Rejuvenation – I had the pleasure of having seen Nancy for both facial rejuvenation and primary care acupuncture. I also have mutual patients with her. I can’t wait until my next appointments with her. Her office is like an oasis of calm and balance. She is very caring a… END_OF_DOCUMENT_TOKEN_TO_BE_REPLACED

Pain Management – Just to throw my two cents in here. When I was training for climbing Mount  Shasta, my knee started to hurt and it was interfering with my training. ONE TREATMENT with Nancy and my pain was completely GONE!!!!! I have had a lot of acupuncture and Nancy’s know… END_OF_DOCUMENT_TOKEN_TO_BE_REPLACED

General Health – Nancy is an excellent acupuncturist with a magic touch. She has a calming presence, which is really important when you are getting needled! Nancy did a comprehensive intake at the first session and focused my treatment on what was most important for my health. I … END_OF_DOCUMENT_TOKEN_TO_BE_REPLACED

Fertility – After trying for 3 years I’m finally pregnant thanks to Nancy. I was referred to her by my OB/GYN and liked her right away. I had treatments once a week for 12 weeks prior to IVF and 2 the day of the procedure, and we had success the first time! I have continued tre… END_OF_DOCUMENT_TOKEN_TO_BE_REPLACED

General Health – Nancy is a talented acupuncturist who takes the time to get to know you and works with you to pin-point, not just your presenting complaint, but what the root cause may be – and then she treats that. Her office is inviting, her demeanor is warm and friendly wit… END_OF_DOCUMENT_TOKEN_TO_BE_REPLACED

General Health & Fatigue – Consider Acupuncture with Nancy Burns! So I had some extreme joint pain and tiredness and was reminded NOT to use feeling ill as an excuse to NOT see Nancy! I saw her the next day and felt immediate relief after my session. I had more energy and no more… END_OF_DOCUMENT_TOKEN_TO_BE_REPLACED

Hourglass conversations are the answer for women experiencing a life change on the path of a mid-life journey. In our videos, we share insights and tips for mid-life and beyond. Join in our conversations and join our community. With topics like these: Fell on Your Tail? Grow Wings - Feeling Prickly? - Personal Magnetism and Mid-life - OMG! What Now? You KNOW it will be fun.

By Appointment in Los Gatos/San Jose

Nancy Burns, L.Ac. is licensed by the State of California Acupuncture Board