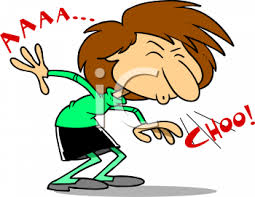 According to Natural Health Magazine

Approximately 3,000 droplets are expelled in a single cough and they fly out of the mouth at speeds of up to 50 miles per hour.

Approximately 40,000 droplets are expelled in a sneeze, sometimes as fast as 200 miles per hour.

If a person is sick their cough or sneeze could contain as much as 200 million individual virus particles.  So, cover your mouth and wash your hands as soon as possible.

Sneezing actually begins in your nerves and it helps to keep you safe. The impulse to sneeze tells the brain there is something in the nose that needs to be expelled in a complex and rapid cascade of events. A sneeze travels about 100 miles per hour.

Sunshine, tweezing your eyebrows, exercise, and even sex can cause a sneeze, however, you never sneeze in your sleep.

Can you stop a sneeze? Breathe through your mouth and pinch the end of your nose.

“Bless you” The post sneeze blessing is from the ancient belief that when you sneeze you are close to death and the blessing will prevent your soul from escaping.

Please join us for upcoming Hourglass Workshops and Events.

For more information about our local workshops and events, simply give us a call at 408-835-7870 or email us via our Contact Page. We look forward to seeing you soon!

"I had some extreme joint pain and tiredness and was reminded NOT to use feeling ill as an excuse to NOT see Nancy! I saw her the next day and felt immediate relief after my session. I had more energy and no more joint pain. Nancy Burns has awesome bedside manner and really cares about her clients. She takes the time to get to know you and goes out of her way to find ways to help you, even if it means referring you to other practitioners." - Holly T.

Pain Management – Just to throw my two cents in here. When I was training for climbing Mount  Shasta, my knee started to hurt and it was interfering with my training. ONE TREATMENT with Nancy and my pain was completely GONE!!!!! I have had a lot of acupuncture and Nancy’s know…

General Health & Fatigue – Consider Acupuncture with Nancy Burns! So I had some extreme joint pain and tiredness and was reminded NOT to use feeling ill as an excuse to NOT see Nancy! I saw her the next day and felt immediate relief after my session. I had more energy and no more…

Pain Management – I have had Nancy treat me for stress, shoulder, knee and sciatica issues. She is very professional, personable and I experienced GREAT results from all the treatments. I HIGHLY recommend her. My husband is a chiropractor and he has referred several patients to N…

General Health – Nancy is an excellent acupuncturist with a magic touch. She has a calming presence, which is really important when you are getting needled! Nancy did a comprehensive intake at the first session and focused my treatment on what was most important for my health. I …

Facial Rejuvenation – I had the pleasure of having seen Nancy for both facial rejuvenation and primary care acupuncture. I also have mutual patients with her. I can’t wait until my next appointments with her. Her office is like an oasis of calm and balance. She is very caring a…

General Health – Nancy is a talented acupuncturist who takes the time to get to know you and works with you to pin-point, not just your presenting complaint, but what the root cause may be – and then she treats that. Her office is inviting, her demeanor is warm and friendly wit…

Fertility – After trying for 3 years I’m finally pregnant thanks to Nancy. I was referred to her by my OB/GYN and liked her right away. I had treatments once a week for 12 weeks prior to IVF and 2 the day of the procedure, and we had success the first time! I have continued tre…

Hourglass conversations are the answer for women experiencing a life change on the path of a mid-life journey. In our videos, we share insights and tips for mid-life and beyond. Join in our conversations and join our community. With topics like these: Fell on Your Tail? Grow Wings - Feeling Prickly? - Personal Magnetism and Mid-life - OMG! What Now? You KNOW it will be fun.

By Appointment in San Jose

Nancy Burns, L.Ac. is licensed by the State of California Acupuncture Board